Spread the love
Mr. Escandar Bedran at only 32 years of age and newly married to Ms. Paulita Reyes of Belize City, was providing entertainment in the form of a club he built on what is currently known as Hudson St. San Ignacio. Mr. Bedran built and operated this bar which was a one flat building made of what would be called in today's time, scrap wood. This was one of his first ventures in business in San Ignacio. His wife made cupcakes, sandwiches and bread-pudding, which was sold at the club. Mr. Bedran tells a story of a gentleman who visited San Ignacio and was a guest at his Uncle Abdu's Elite Club, also located on Hudson St. in earlier years. This gentleman, name unknown, told about a famous club in New York known as the Stork Club. More than likely this influenced Mr. Escandar into naming his, the “Stork Club”. 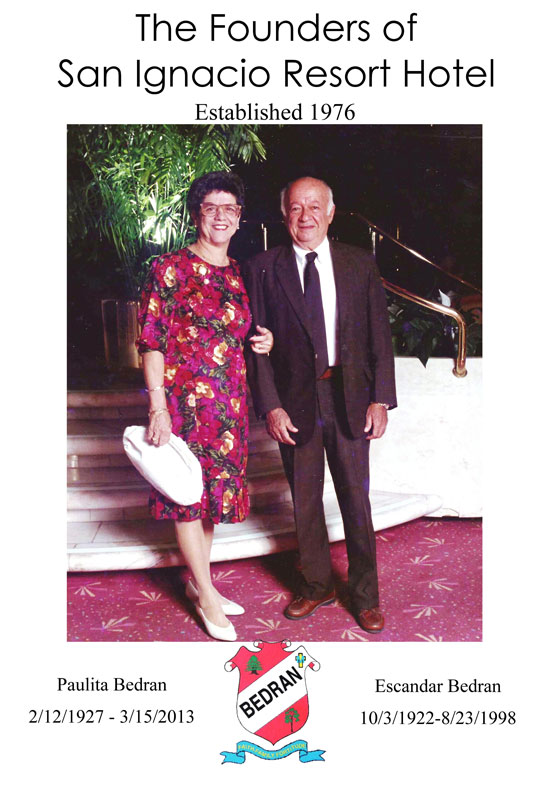 During Mr. Escandar's years of logging in the Kendal area of the Stann Creek district, Mr. Bedran personally selected hardwoods and pine lumber to build his second club, in the exact same location on Hudson St., which was again called the “Stork Club”. This two story building designed and built by Mr. Bedran, operated not only a Club and dance hall but a community center / boys club / ice- cream parlor / and even classrooms for Sacred Heart College. It truly was the social hub for activities and entertainment for the people of San Ignacio, Santa Elena, Benque and even distinguished gentlemen and women from Belize City.

The Stork Club in those days hosted many dances, weddings, school plays and a variety of functions. Mr. Escandar even had his own distillery in Cool Shade and made his own rum for the club and other bars throughout Belize. Ask anyone if they remember the famous Tiger Nail and Cool-Shade rum. Stork Club at that time was home of the renowned Atlanticos Band which he helped to manage and was in attendance, entertaining at most dances. Mr. Joe Moreno, one of the singers in Atlanticos, continues today to sing and perform along with his sons and daughter in today's “Stork Club”.

The Stork Club flourished for 10 years, until a very devastating fire in 1968, which destroyed not only that club, but also, many homes and businesses in San Ignacio. Tragedy hit again only 4 years later when the largest fire in San Ignacio in 1972 destroyed over 28 homes. Among those were Mr. Escandar's family residence, his Shell Gas Station, and many of his relative's homes and businesses. No one or nothing however, could destroy Escandar Bedran's dream.

In 1976 the San Ignacio Resort Hotel was born which was a lifelong vision for Mr. Escandar and Mrs. Paulita Bedran, the Founders of the Hotel. Their immense love for the San Ignacio Town and Belize itself inspired the Founders to engage in the construction of a place where individuals could come together, relax, and enjoy the beauty Belize has to offer.

Yet, the journey towards this goal was not an easy one for the couple. Mr. Escandar and Mrs. Paulita were presented with many challenges and struggles throughout the years; nevertheless, the couple’s dedication and perseverance allowed them to continue fighting for their dream.

In the early 1980’s, their daughters—Mariam, Paulita, Terry and Nazle, joined their father in developing what is now the San Ignacio Resort Hotel. However, in 1998, heartbreak struck the Bedran family with the loss of their beloved patriarch. It was at this moment that the daughters assumed the responsibility to fulfill their father’s legacy and placed continuous efforts into achieving his lifelong dream.

Today the San Ignacio Resort Hotel is a premier, full-service Luxury Resort that exemplifies the vision of the Founders. This year (2013), the Resort became the title winner of the Belize Tourism Board’s ‘Hotel of the Year’, an award that recognizes a hotel that exceeds excellence in all true forms—perfect ambience, outstanding facilities, positive attitude, and the best of what Belize has to offer.

Although receiving this title was a momentous event for the Hotel, it was also an emotional experience for Mariam, Paulita, Terry and Nazle. During this time, they were dealing with the loss of their mother— the matriarch of the Bedran Family, their devoted companion and supporter throughout the years. This award personifies the lifelong struggles, hopes, dedication, and devotion of Mr. Escandar and Mrs. Paulita Bedran.  It helped embody their parents’ legacy and fill an emptiness the sisters were enduring at that time.

‘It’s really hard to wrap up thirty-seven years in just a few words but we’re living a legacy and that’s what makes it even more special. We are, like I said, living a dream and reliving a dream, building a dream that started a long time ago.’ – Mariam Bedran, Managing Director San Ignacio Resort Hotel)

The Hotel of the Year award is evidence that their parents’ vision is finally a dream come true.