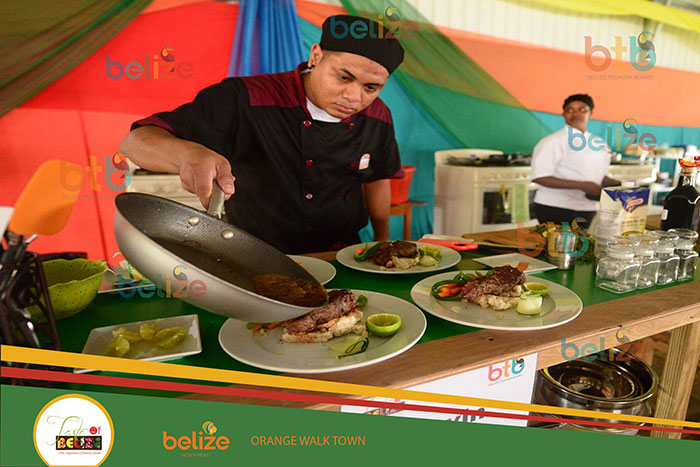 ORANGE WALK, BELIZE, July, 9, 2016– Kevin Chi, the Prep Cook at the San Ignacio Resort Hotel won the national Amateur Cook competition at the Taste of Belize 2016 hosted by the Belize Tourism Board. Kevin took first place over 4 other contestants from  across the country and won a beautiful etched glass award, an all-expense paid trip to the See and Taste Belize event in Florida, $2500 cash, a gift bag from Travellers Liquors, among other gifts from Bowen & Bowen Ltd. Kevin’s winning dish was a Pan Seared Belizean Duo consisting of an exquisite combination of beef fillet and shrimp, mashed coco, and fresh vegetables seasoned and prepared with his original blend of herbs and spices.

I am so excited,” said Kevin Chi upon receiving the award. “I would like to thank the San Ignacio Resort Hotel for sponsoring and believing in me. My teammates, Sam and Max, for helping me prepare for this. It was such a great experience that we all got to come out as a team and have a little fun away from work doing something that I love.”

“We are so proud for Kevin. He put in a lot of work for this and truly deserves this!” said Mrs. Paulita Figueroa, Operations Manager of the San Ignacio Resort Hotel. “It is so great that our team can get away from the Hotel and participate in such a stellar and amazing culinary event in Belize.” she stated.
The other winners for the event were Chef Eva Longsworth for Belize Master Chef, Maria Urbina for Cake Decorator of Year, Adrienne Young for Cupcake Decorator of the Year, and Mark Jacobs for Bartender of the Year.

To celebrate Kevin’s achievement, the San Ignacio Resort Hotel will feature his winning dish, the Pan Seared Belizean Duo, at their on-site restaurant– the Running W Steakhouse. In addition, the Resort will be attending and exhibiting at the See and Taste Belize event in Florida later this year.

The San Ignacio Resort Hotel is a premier full – service Belize resort, located in the Cayo district. The hotel boasts first – class amenities and accommodations for those seeking to relax and enjoy a beautiful tropical resort, yet offers nearby adventure for those wanting to explore Belize. Our luxury San Ignacio Belize hotel is centrally located for adventure tours to nearby archaeological parks, caves and nature reserves and boasts views of rainforest and wildlife from each of its 26 rooms.