O, Land of the free by the Carib Sea…

We might know every word and every beat of our National Anthem but how much do we know about the persons responsible for creating our country’s song? Let’s celebrate National Anthem Day with a few historical facts about the author of “O, Land of the Free.”

Originally named “Oh, land of the Gods,” our National Anthem was written in 1963 by Mr. Samuel Alfred Haynes (1898-1971)—known as an unsung hero by the National Institute of Culture & History and the music was composed by Mr. Selwyn Walford Young.

Samuel Haynes was a social activist and a soldier in World War I, he was among other Belizean soldiers who fought in the colonial effort for Great Britain. Mr. Haynes returned to Belize (then known as British Honduras) because of abuse and discrimination during the war. He became actively involved in local movements that encouraged Belize identity and fought against racial discrimination. It is believed that all these experiences led him to write the song, “Oh, land of the Gods.”

The song was officially adopted on Independence Day, September 21, 1981 and renamed “O, Land of the Free.” Ever since, we continue to raise our flags, be patriotic and sing our national anthem in the name of our country, Belize. 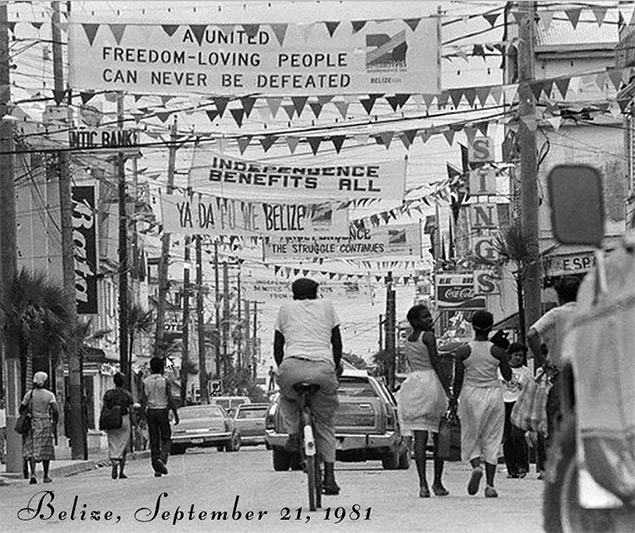 
O, Land of the Free by the Carib Sea,
Our manhood we pledge to thy liberty!
No tyrants here linger, despots must flee
This tranquil haven of democracy
The blood of our sires which hallows the sod,
Brought freedom from slavery, oppression's rod
By the might of truth, and the grace of God,
No longer shall we be hewers of wood.
Chorus:

Arise! ye sons of the Baymen's clan,
Put on your armour, clear the land!
Drive back the tyrants, let despots flee –
Land of the Free by the Carib Sea!
Nature has blessed thee with wealth untold,
O'er mountains and valleys where prairies roll;
Our fathers, the Baymen, valiant and bold
Drove back the invader; this heritage hold
From proud Rio Hondo to old Sarstoon,
Through coral isle, over blue lagoon;
Keep watch with the angels, the stars and moon;
For freedom comes tomorrow's noon.
(Chorus)

Resources:
Wikipedia: Land of the Free
myBelize.net: The Origin of the Belize National Anthem
nationalanthems.info: Belize